Top > Services & Solutions > Optimization of Homecare > The house is a blackout of 52 hours.

A blackout occurred in Itami-shi, Hyogo with our base.
However, the life infrastructure was usable freely because we got ready for the disaster.
We were able to use an air-conditioner, a refrigerator, a washing machine, a hot water supply device, a lavatory.

The wish cannot stand hurriedly after receiving a disaster.

The preparations for disasters are needed.

We have difficulty with a supply even if we request it after undergoing a disaster.

The storage that can act actively is important than we wait by passiveness.

Our blackout life began at about half past 13.
There was system malfunction of Kansai Electric Power and did not understand the correct information, but 1,000,000-2,000,000 houses seem to have been black out in these days.

Electricity restored at about half past 17 on Thursday, September 6, 2018.
Approximately 2,190,000 totals were blackout then in Kansai Electric Power, and non-restoration (during a blackout) was approximately 234,000 houses.
The restoration rate was the 80% level.
(September 6 17:00 by KEPCO)

An earthquake occurred in Hokkaido at 3:08 a.m. on September 6.
In Hokkaido, 99% of blackouts restored 51 hours later.
That the blackout scale did not correlate with the scale of the primary disaster was exhibited.

Lack of supplies caused by a blackout

If there are many people to suffer from at the same time, the probability received a help and support lowers.

You had better seem to less expect too much support because a blackout is not a crisis of emergency life and assets.

The supermarket, the convenience store, the drugstore closed storewide this time.
The food and drink gets nothing in order that the vending machine terminates by a blackout.

Unlike the primary disaster such as an earthquake and the rainstorm snow, it is rare in the "2nd disaster" that a refuge is established.

There is not the refuge establishment this time either, and there are not emergency rations distribution and the distribution of boiled rice, too.

A big earthquake occurred accidentally this time in Hokkaido in morning of the third day, and the interest of the nation was turned to Hokkaido.
Because a communication bridge of Kansai Airport had played a key role speaking of the damage situation of Kansai, we became the quiet blackout life.

Cable TV was cut off.
A useless picture was sent with the net television.
Because the radio program was a normal program, the broadcast of the disaster information was not sent.
The information of the blackout was poor.

Because a website of Kansai Electric Power fell, we waited only in poor information.

2 million blackouts were not reported all over Japan.
The support supplies hardly reached Kansai
When an earthquake of Hokkaido was reported before long, the Japanese citizen was interested in Hokkaido

We developed a self-defense plan and stayed in the home.

We prepared a flashlight and a candle by the first action stage.

We changed a PV system to domestic driving.
Because it was the middle of the typhoon, the quantity of photovoltaic power generation was a zero.

We began intelligence immediately, but we assumed the massive blackout and started preparations because information was not obtained from a net and a radio.

There were the area residents who stayed days among cars.
It is cruel that an air-conditioner and a refrigerator are not usable on a day of more than 30 degrees Celsius.
It is terrible when we imagine it because it was intense heat of 40 degrees Celsius if it is midsummer.

We introduce below a summary.
AmpiTa shows a more detailed information.

We got ready for a generator in a heavy rain.
Portable generator "enepo"(HONDA) of the fuel is cassette gas.
We started an engine and installed a prolongation cable in a house.

The appliance to insert in the outlet including the refrigerator by this method is operated.
However, we are electricians.
We added an original process, and a hot water supply device and the ceiling illumination were usable, too.

The combination of air-conditioner and refrigerator was practicable with one home generator.

Because we were troubled when the washing machine terminated on the way, we terminated an air-conditioner at one time.
A hot water supply caliber is similar, too.

Even if the human can endure a diet, we cannot endure the excretion.

Our lavatory is automatic.
One tank-type lavatory is installed.
The automatic lavatory does not work after having been blackout.
It supplied water with a bucket. 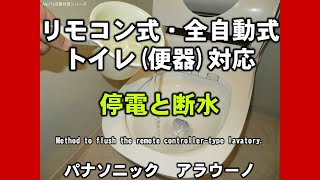 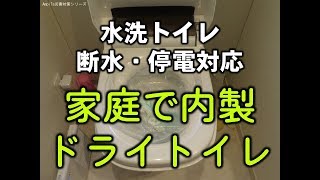 We do not narrow the choice of the eating.

We are not troubled with a diet if we can use a refrigerator.

Because a rice cooker was not usable with electricity shortage, we boiled the rice of the retort pack.
The importance of boiling hot water was understood.
The enamel pan cooking of LE CREUSET was useful, too.

When a ventilation fan is not usable, a fever and steam of the cooking deteriorate house environment and heighten a heat stroke risk.
Be careful.

A study is needed about the cooking method.

The television does not live. The video is a no particular.

We can watch a video if we can get a power supply.

It was a just good item for bored children.

The cause that television being trouble is not an indoor device.
There is a problem in a optical communication line.

We finally experienced a 52-hour blackout.

Storage and support simulation from usual times were helpful and spent three days without large confusion.

Loss of the electricity is extended to electric, water service, hot water supply, the lighting.

If built-in battery of the medical equipment works for two hours, we have two hours to spare.
The preparations for home generator do not need it for 2 hours.

The patients are highly concerned with a blackout risk during respirator use.
The risk in this blackout is heat stroke of the healthy subjects.
In this summer when there were many dead people due to the thermic fever in Japan.
A call is hard to be connected during a blackout.
Because a signal stops, the arrival of the ambulance is late.

The storage reduces the risk of death.

A risk and hazard in the medical treatment

When we use the medical equipment such as respirators, a risk level rises after a blackout in 2-3 hours.

The respirator works by built-in battery for around two hours, but does not work at all if it is cut off.

Built-in battery is not a thing having addition easily

The patients move to the safe place or an independent power supply is needed.

This typhoon occurred in summer more than 30 degrees Celsius.

As for the patients with thermic fever that the Metropolitan Fire Board transported, half fainted indoors.

Neither the air-conditioner nor the electric fan is usable when blackout.
A refrigerator and a vending machine stop, and the cold drink is not available.

The thermic fever is a large menace.

An ambulance is not normal.

If a home (domestic) phone line is not usable, we cannot inform a fire department (119) and a family doctor.

Because a signal turns off the light, traffic confusion occurs.
Even the ambulance is prolonged at movement time.